Check out The Fourth Wall's other offerings

...and now his watch is ended.

“Love is the death of duty”

Or is duty the death of love? Jon and Ygritte test the old saying. In this episode, an irresistible force meets an immovable object, Game of Thrones style. We get a non-stop thrill-ride directed by horror film star Neil Marshal, who returns after directing the Battle of Blackwater Bay in season 2. And guess what – this is faster, mightier, bolder and way longer. The entire episode focuses on the men of the Night’s Watch, and deservedly so. Faced with seemingly insurmountable odds, the Night’s Watch fought back, as did the imperious Castle Black. Dive in for the usual dissection and analysis.

“Night gathers, and now my watch begins. It shall not end until my death. I shall take no wife, hold no lands and father no children. I shall wear no crowns and win no glory. I shall live and die at my post. I am the sword in the darkness. I am the watcher on the walls. I am the shield that guards the realms of men. I pledge my life and honour to the Night’s Watch, for this night and all the nights to come.” PLEDGE OF THE NIGHT'S WATCH 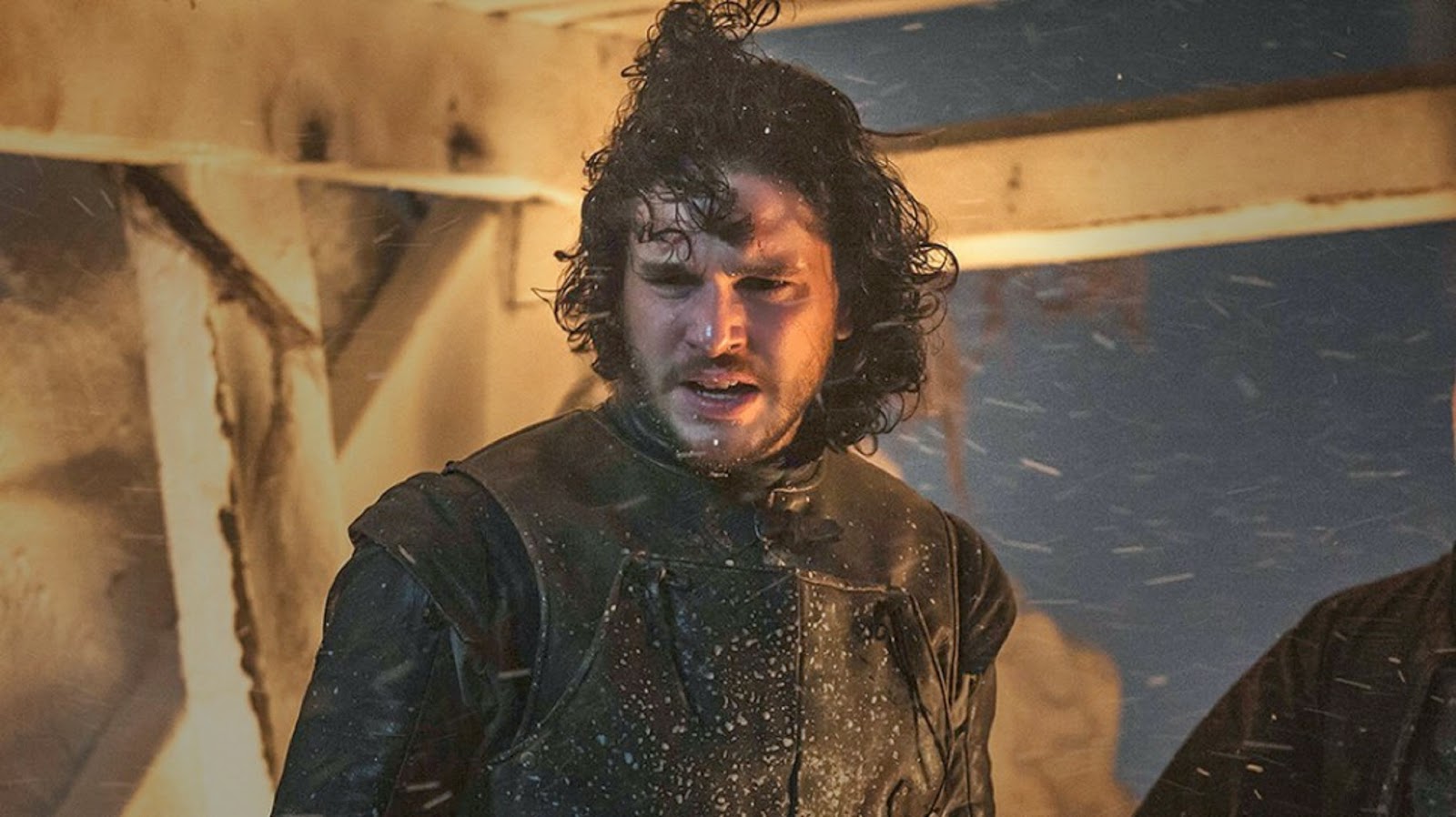 Valar morghulis. Boy, the North just can’t catch a break. I was beginning to feel like George RR Martin was about to sucker-punch us AGAIN, pitting 100,000 wildlings, wargs, mammoths, giants and anything else he could get his meaty hands on, against a puny 100 or so Night’s Watch (plus a boy of 10, a Targaryen and a dog). The Night’s Watch was hopelessly outnumbered and seemed to be staffed by scared little boys. But these scared little boys stepped up, as power passed from the older Ser Alliser Thorne and Janos Slynt (more on him later) to the younger Jon Snow, Eddison Tollett and Sam Tarly.

But the real star here was in front of us the whole time: Castle Black. The effects are brilliantly executed and there is a real heft when the Gates or the Mammoth shake. In Westeros, Bran the Builder (not Bob the builder…) built this imperious watchtower using good old hard work and allegedly some magic too, to a length of 300 miles and height of 700 feet. Castle Black fought back along with the brothers of the Night’s Watch, throwing scythes, cold-rolled steel and barrels of fire at the wildling invaders. Consequently, Castle Black is safe…for another 12 hours or so.

This is why TV is so entertaining and epic these days: the battle scenes in this episode would hold their own in any fantasy film. Except unlike in a fantasy film, we’ve spent a good portion of the last 40 hours watching these characters and so every movement and every death is meaningful. When Ygritte or Grenn die, we really feel it.

These episodes often provide the ‘payoff’ lacking in the rest of Game of Thrones (like if Oberyn Martell had defeated the Mountain). Here is when the hours of patient character-building pays off. Having said that, very few characters in Castle Black are as fleshed out as the ones in Kings Landing and actually, we’re only properly invested in Jon Snow, Samwell/Gilly and Ygritte. Nonetheless, the Night’s Watch is the most sympathetic part of Westeros (even if allegedly some of them are rapers and serious criminals) and even Ser Thorne departed having warmed our hearts a bit.

In terms of the action, we’ve got several different set pieces: the giants at The Gate, wildlings at the South gate and arrows being exchanged all over (those pesky medieval ground-to-air missiles). The Battle of Blackwater Bay was more impressive in some ways because of the wildfire, but the ground mano-a-mano action was way more impressive here. This feels the more expensive of the two episodes and the graphics are much better too. Overall, this episode felt a bit more ‘Hollywood’ than the rest of the season: all this talk of love (“You love her…I heard it in your voice”) and the usual Hollywood clichés about war ("Castle Black will stand!" and "you must hold the Gate!").

Although it didn't mesh with the rest of the season, it still felt earned and helped give the Brothers a sense of vulnerability. They were all obviously thinking about death. In amongst all this action, it’d be a mistake to think there were no themes, because there were: love, duty and who we are when we kill. This is inferred by Tarly’s monologue about forgetting who he was when faced with a White Walker (“I wasn’t Samwell Tarly anymore…when you’re nothing at all, there’s no reason to be afraid”). This is how these neglected, persecuted men become the rocks that Castle Black needs them to be.

At this point, many people would point to the difficult lives of people in the North in contrast to the rosy urban lives of Kings Landing and Highgarden: this is the point. The Night’s Watch does it for the whole continent but rarely gets the reward or resources (we’ve seen Cersei, Joffrey and others reject their request for reinforcements before). This is clearly a military allegory: a dangerous and thankless task done for very little money or recognition, but for a sense of duty.

Ygritte: “We’ll be up and over before they know what’s happened!” NO YOU WON’T!

A nice moment occurs when Sam asks about being in love (or having sex?) and Jon Snow pontificates about...something.

Jon Snow: “There’s this person, this whole other person, you’re wrapped up in them…for a little…for a little while you’re more than just you…oh, I’m not a bleeding poet.” Tarly: “No, you’re really not.”

Jon Snow and Ygritte: ah yes, the ultimate star-crossed lovers, literally from different sides of the wall. Although there’s a lot going on, the key thing here is that in any other society, these two would be together and regularly go at it like lion seals on meth. Instead, Jon Snow is a “Southerner” and Ygritte is a “wildling” and so they are always diametrically opposed. A man must do his duty - Jon Snow is a Stark, after all, which means it's only a matter of time before his goody-two-shoesiness kills him. As Omar would say: a man's gotta have a code. Like Sam Tarly, Jon Snow became something else in order to be a good Night's Watch Brother.

Ygritte makes the point earlier that these lands were theirs, until they were pushed out and separated by a wall. One could make a comparison to real life, like in China, Palestine, England/Scotland being the obvious one, but GoT hasn’t spent a lot of time on it and neither will we.

“All I want to think about is how each one of these arrows will find its way into a crow’s heart”
Ygritte had a good long look at Jon Snow before she was shot, meaning that she just couldn’t bring herself to do it. What she had shared with Snow in the cave and elsewhere was just too strong – remember “I'm your woman now, Jon Snow. You're going to be loyal to your woman”?

Game of Thrones has a real problem with happy couples, in that it has none. Apart from the now deceased Starks + Khal Drogo & Daenerys (although their relationship seemed to have started with rape), these two were the only functioning couple in GoT, and now GRRM has extinguished that hope as well. Well, atleast we have Littlefinger and Sansa to look forward to! Hey, don’t run away, come back…

The moment when Jon Snow holds her in death was a true Hollywood moment, but it’s been earned; there was real pathos here.

“I made a promise to defend the wall and I have to keep it…because that’s what men do!”
Samwell Tarly & Gilly – Samwell finally confronts his feelings for Gilly and they kiss, in no small part due to Aemon Targaryen. Don’t forget that Gilly is only alive because Ygritte saved her…

By the way, is Olenna Tyrell the lady Targaryen was talking about? He’s about 20 years older than her so it’s unlikely, but she did say a while ago that Targaryen boys were all the rage back then… 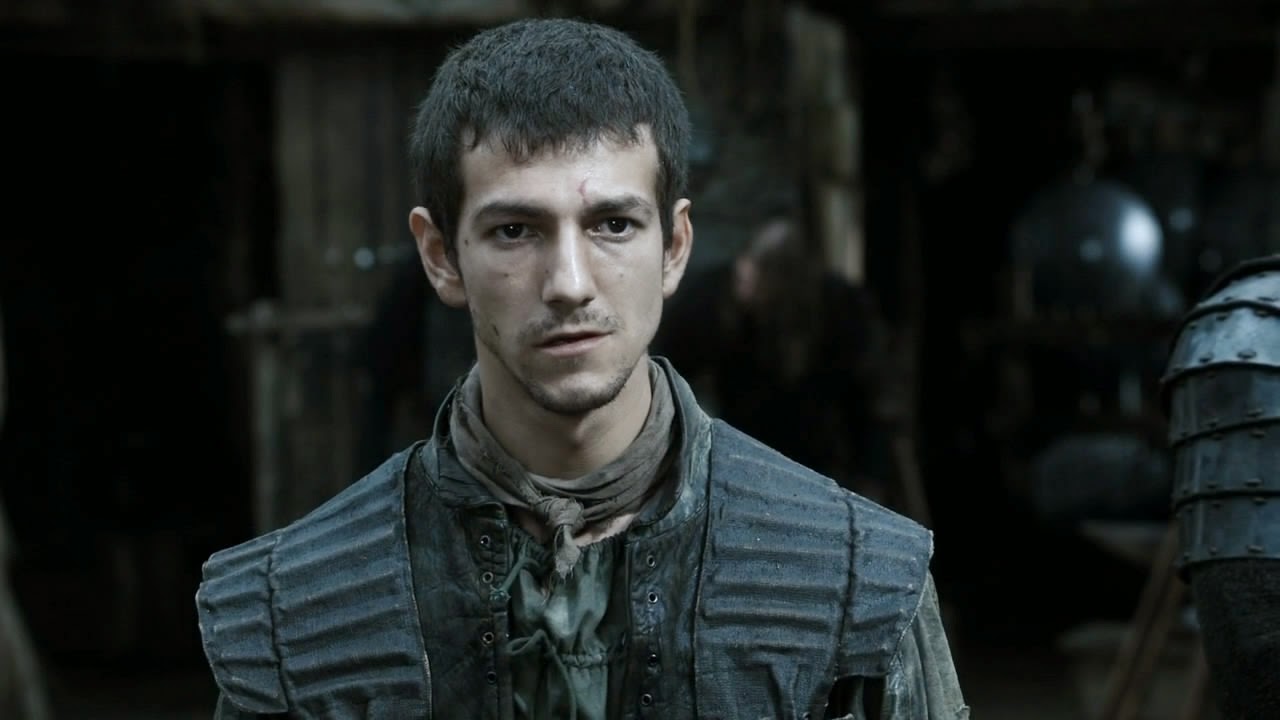 Pypar, Grenn and many others: we didn’t get to know them too well, but their non-witty banter with Jon and Samwell will be missed. They were true brothers and the only friendships in Game of Thrones that you knew were unbreakable. And now their watch is ended.

Other observations:
Game of Thrones just gets more and more eloquent: “a nice juicy slice of ginger minge” was a particularly poetic turn of phrase. They simply don’t give a damn.

Also poetic was the justice served cold by the child Olly on Ygritte with an unusually well-aimed arrow. Who knew Olly was so good?

Apparently, the wildling version of a weird drunk sexy story involves copulating with a bear…“She was nice and soft down below”.

The Yorkshire accent seems to be the go-to Northern accent: both Jon Snow and Ygritte are Southern actors putting on ‘Northern’ accents.

“And she never offered”. Poor old virginal Sam…well, atleast you kissed her now! On a related note, he seems to have read the pledge a little too closely…

Aemon: “Old age is a wonderful age of ironies”. He must regret not taking the throne – look where it’s gotten Westeros.

So what next? We’ll get to see some sort of “Heart of Darkness” parallel with Lord Snow going deep inside Mance Rayder’s territory to coax or kill. This is what Game of Thrones likes best, stripping narrative down to the bare bones. But if this takes him longer than a few hours, will there be anything left to defend? Where are the Greyjoys, Boltons etc. to defend the North?! It wouldn't have happened in Ned Stark's day, I tell thee! Also, hopefully we’ll get resolution on Tyrion’s storyline next week. Oh, and we haven’t seen Stannis and Bran for a while, have we?

LoneCrapShooter
Yes, you and I are the same. Like a swan and a hippo are the same. "Ankit". noun. Commonly found swearing loudly whilst reading the FT.